When it comes down to it, what we need are people who care. Care enough to give to someone a thousand kilometres away, just because they know that the new board or fins or leggie is going to give someone that little bit of stoke. There’s not much point being too gentle here because we’ve all received crappy Christmas presents because we wrongly believed that Mum would just know what to get us. 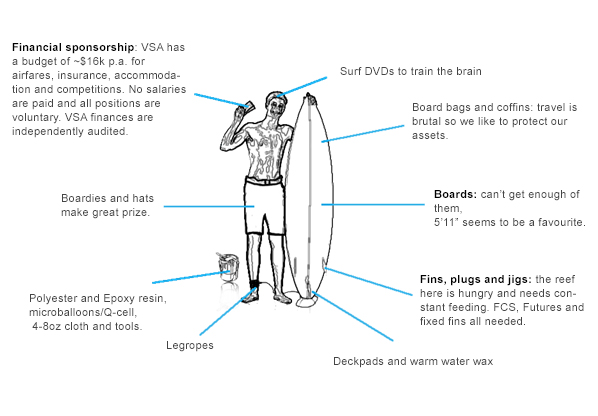 You get the idea, if it’s surf related the kids here will just lap it up (they’re not fussy like kids back home are these days…).  Any and all donations would be greatly appreciated and we’d go out of our way to make sure your contributions were acknowledged far and wide.

What’s in it for you?

The Vanuatu Surfing Association administers a growing Facebook presence that currently has over 200 members.  We regularly post updates on Association activities and alter our profile appearance to showcase the companies that have supported us (i.e. Timeline photos, Cover image and photo albums).   This exposure is reserved exclusively for organisations which have committed to supporting the VSA.

We run a number of domestic competitions every year and have used these events to facilitate targeted promotion through event naming rights and brand exposure. Following the most recent competition we generated articles in each of the three National print newspapers including colour pictures, received TV exposure and numerous radio slots.  Similarly, whilst participating in Newcastle for Surfest 2013, our local boys were interviewed for both radio and print media.  For the Melanesian Cup 2012, our President appeared on Radio Australia to publicise the VSA and surfing in Vanuatu.  Our weekly reach on Facebook is approximately 1700, with our ‘Friends of Fans’ metric approaching 18,000.  It may not be massive but they’re all real people, with many being surfers themselves.

We can also guarantee a warm glow, deep down in the pit of your being.  And if that’s not enough, we can offer some hollow lefts, big smiles and strong kava but you’ll have to come here for yourself to get those!